The Art of Tug of War 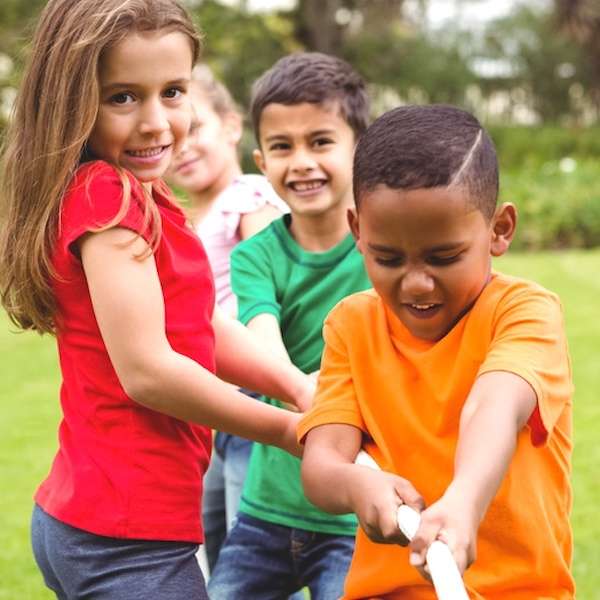 You may know it as a kids game where you pulled on a rope at a School fun day or sports event, but this ancient game has been played by gladiators in training, warriors in China and the Greeks. Although it is thought to have been invented in Ancient China where it was played as a test of strength and power, the true origins of this game are unknown. But as long as there has been a rope and two people willing to pull on it, people across the Globe have enjoyed testing their strength in the game of Tug of War.

Tug of War has been a competitive sport since the 1890’s, when the First World Championships were held in England. Initially a part of the Olympics, the sport was dropped from the Olympic Games after the 1920 Olympics and is no longer considered an Olympic sport. As a Birthday Party game it is right up there with our favorites and is the perfect way to encourage teamwork and fun. Here is how you do it:

Tug of War is usually won by the team that best manages to work together effectively by forming a unified pulling machine, but there are a few tips and tricks that can help you maximize your teams Tug of War abilities.

For as long as Tug of War has been around players have been coming up with variations of the classic game. Although not all of these examples are appropriate for a Kids Party, some of our favorites include:

Tug of War on Water: Okay, so this is not technically played ON the water, but if you lose, you are sure to get wet! This fun variation is played by having two teams stand across a body of water (think paddling pool or an actual pool). Both teams tug on the rope until the losing team topples into the water. We highly recommend this for those hot Summer days.

Tug of War with Obstacles: This variation is best played with large obstacles that the players have to navigate while pulling – items like old tires, pillows and rolled up blankets add some fun to the game and won’t injure any of the participants.

While you can play Tug of War with anything from a sheet to a clothing line, if you opt for a rope, you need to know how to find the best one, because nobody likes rope burn. Stay away from Nylon ropes, which cause friction or rope burn when sliding through the participants’ hands, and look for a natural manila fiber rope. General consensus agrees that the perfect size for a Tug of War rope is a diameter of 1.5 inches and a length of 10 – 15 meters.

Where can you get such a rope? We can highly recommend R&W Ropes who offer quick delivery Nationwide and a wide range of Tug of War ropes.

And there you go! A deep dive into Tug of War, how to play it, where to get a rope and a sprinkle of History of the game. We know that not everyone has the energy or patience to organize Tug of War with 30 screaming kids at a kids party, which is why Yombu has a whole bunch of Kids Party Games enthusiasts who would love to do this for you at your next party, and throw in some other games like sack racing, egg and spoon races or musical chairs. See more info here.

Why is it called Tug of War?

According to the Oxford English Dictionary, the term “Tug of War” was originally used to describe a tussle or severe contest for supremacy. Only in the late 19th Century was it adopted to describe the game. In China and India, it was commonly referred to as “hook pulling”.

Where should the strongest members be placed?

The best spot to place the strongest members of your team in Tug of War is at the front and very back, in order to leverage their strength. But be sure not to group the weakest members together in the middle; mixing and matching is generally the best strategy.

Seth is a Content Marketing Specialist at Yombu, where he writes blog articles, eGuides, and other resources to help Entertainers and Party Companies build their businesses.

The weekly newsletter for kids party planners and parents.

How To Throw A Fantastic Beasts Themed Party

How To Throw An Aladdin Themed Party

How To Throw A Toy Story Themed Party in 2022

How To Throw A Winnie The Pooh Themed Party

How To Throw A Mermaid Themed Party

How To Throw A Fireman Themed Party in 2023

How To Throw A Harry Potter Themed Party

Balloon Art Ideas: What You Can Do

Plan B.
The Weekly newsletter for parents and party planners